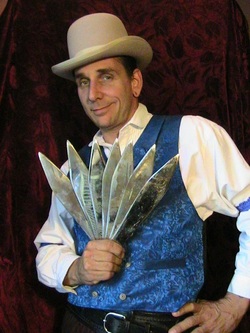 Matt Molotov Bouvier:
Originally from Syracuse New York, Molotov's love for the circus and side show developed at an early age. Since then he has trained and worked with some of the best entertainers in the business.
After obtaining a degree in social work in NY, he moved to San Francisco, CA in 1990. There he taught himself to eat and breath fire, leading to his first notable gig with a band in Seattle, WA.

In the spring of  2000, Molotov went to work for Hall and Christ's World of Wonders Circus Side Show for 2-26 week seasons. There he trained under Chris Christ learning many side show acts including sword swallowing and the very dangerous Impalement act of knife throwing. During the off-season his time was spent working with the notable circus families, The Nocs, the Winns, the Wallandas, The Vidbels and The Great American Frontier Show.

From 2003-2010 Molotov acquired his own show The Wild West Follies, a self contained traveling wild west stage show from Lee Stevens. The show contained his skill stunts learned over the years and included tricks performed by his trained pig Pickles. The Wild West Follies traveled and performed at the state fairs in Florida, Wisconsin, Illinois, Vermont, North Carolina, Alabama, New Mexico, and Kentucky. They performed at the Denver stock and horse show and Rodeo, and the Rio Grande Valley stock show in Texas.

In 2010,  Molotov moved back to San Francisco where he formed his current company and thrill show Americana Mayhem.  He has performed with many notable local troupes such as Velocity Circus, Vaudevire Society, Earth Circus and The SF School of Circus Arts.  Some of the many TV appearances he has made include MTV, The Country Music Channel, The Travel Chanel, National Geographic, AMC's "Freakshow," and "Oddities SF." He currently resides in the SF Bay Area where he performs and teaches Circus and Wild West Arts classes.