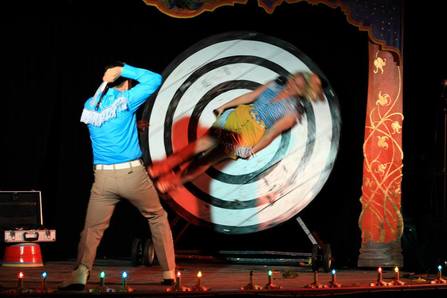 ​﻿Knife Throwing:
Audiences gasp as Molotov quickly throws big Bowie knives all around Miss Dixie's unflinching body outlining her with deadly precision. Like two danger loving daredevils, Molotov throws as Dixie dances back and forth dodging every knife with split second timing. He throws knives backwards lining Dixie's silhouette, and then throws blindfolded, only relying on the sound of Dixie's hammer hitting the board. During the act a volunteer is chosen from the audience to perform a knife throwing gag. The gag is a b﻿ig crowd  pleaser, but harmless, leaving the volunteer thinking they've defied death!  For the big finale, Molotov spins Dixie on the wheel of death throwing his blades as fast as he can barely missing her moving body. ﻿ 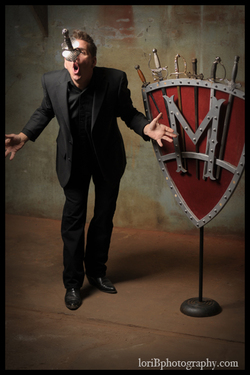 ﻿Sword Swallowing: Molotov is one of the only people left still performing the dangerous art of sword swallowing.  He swallows swords, sabers, bayonets, and coat hangers down the hatch without a scratch.  His swords measure up to 28" long and reach all the way down to the bottom of his appetite.  He will gladly explain to audiences the process of swallowing a sword with light hearted and tasteful humor.  Volunteers are encouraged to help him with a special trick, leading up to the finale where he swallows an actual sandwich of swords!﻿ 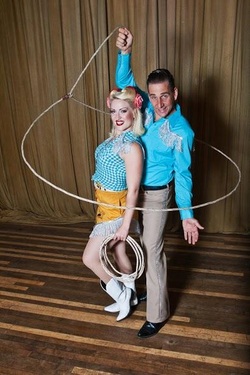 ﻿ Cowboy Trick Roping: Miss Dixie an Molotov are trick and fancy rope artists who spin lassos and amaze audiences performing up and down the West Coast. Together they perform tricks from the old west. Molotov has spent over 15 years practicing this skill and trained Dixie, guiding her to become the new thriving trick roping artist she is today.
Starting off with his butterfly spin, Molotov quickly moves into vertical loops, merry-go-rounds, and tap-ins with more fancy footwork than you can shake a stick at. Miss Dixie's cute country cowgirl act will win the hearts of the audience as Molotov catches her in his lasso. Their synchronized rope routine includes the wedding ring with the bounce, shaking hands and pop-ups, ending within their big loop.﻿ 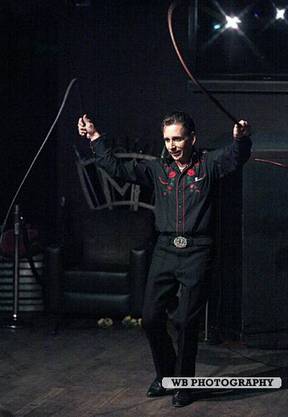 Precision Bullwhip Cracking: A symbol of control and adventure the sharp crack of the whip is a thrilling ride that will command everyone's attention. Molotov and Dixie demonstrate the power of the bullwhip with precision and force.  Using only finely braided kangaroo hide whips, the the tool seems to become an extension of their arms as they crack rhythmically to music.  Once they get those double whips going it sounds just like an old steam engine rolling in.  Molotov loves to crack his long ten foot whip wrapping it around Dixie's body, spinning her into him for a little romance.  Reminiscent of the famous Zorro, they cut flowers out of each others hands and mouths faster tan the speed of sound. 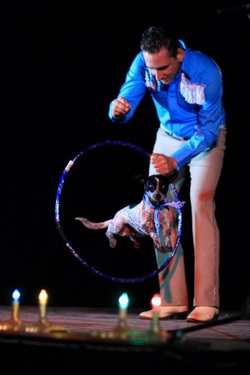 ﻿America’s Favorite Performing Dog - Dually: Everyone loves watching this adorable rescue dog as he performs amazing tricks.  Half terrier, half cattle dog and  100% heart,  this little guy will make you laugh with his funny antics.  Whether he is showing off the fancy ways he jumps through his hoop or doing a little grocery shopping with his miniature shopping cart you are gonna love his fun personality.  In his cute costumes he walks the figure 8, runs the grapevine, and dances on his hind legs, even stealing Molotov's, ahem, underwear!  These are just some of the fun tricks Dually does.  Dually loves to be on stage and audiences love him!
Following the show Dually is always available for affection, autographs, and photos. With his many costumes and tricks up his sleeve, he is perfect for walk around ambient entertainment.  At 19 lbs,  he's a small dog with a big personality.﻿ 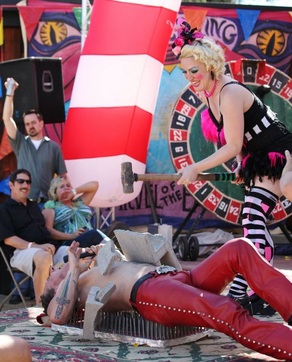 ﻿Mysteries of the Sideshow: The bed of nails, the electric chair, the human blockhead, fire and glass eating, and fire breathing - all strange but true super human feats of mind over matter.

The Bed of Nails:  Molotov lays on a bed of over 500 sharp steal nails just like a fakir from the far east.  Dixie stands on him pushing this pain proof man a little deeper into those nails. She bounces and pops a balloon on his chest crushing into the nails with all her weight. And for the finale, breaks a real cement cinder block on his chest, practically exploding it with the force of her 15lb sledgehammer.  Also performed as Al and Peg Bundy in their salute to classic tv, "The Bundy's".  A huge crowd pleaser.

The Blockhead: A sideshow classic- Molotov pounds nails, icepicks and screwdrivers into his head with a hammer. Don't worry there's no blood and no pain, because where there is no brain there can be no pain, and Molotov is what they call a brainless painless wonder.

Fire: Molotov performs a comedy fire eating routine, eating fire-like shish kabobs and even drinking it by the spoonful like chicken soup. He just can't get enough of that fire soup! Breathing fire is also one of his favorite past times. Featured on the TV show, "Oddities SF"  as the human volcano- Molotov breathes huge 15ft flames from his mouth like old mt Vesuvius.

The Electric Chair: Similar to the electric chair used to execute criminals, this device emits high voltage with low amperage electricity.  Miss Dixie proves the impossible possible as she sits in this very real electric chair and shoots sparks from her fingers, lighting torches off her fingers and tongue. She illuminates an ordinary florescent light bulb, just by touching it with her hand. This truly is an electrifying example of "weird science" sure to charge up every audience.﻿

﻿Burlesque: The tasteful art of the tease. Dixie's burlesque repertoire has everything from elegant solo acts to light hearted fun duets. Her solo acts include the classic fan dance, stocking and glove peels, boa teases, and tassel twirls. Her best known duets include saucy french beatniks having fun with a bagget, country cowgirls having a down home good time, and the elegant 1920s flapper that just stepped out of the past. At your preference, she can be more or less conservative. Her shows are a way great way to spice up any event or add some fun to your birthday or bachelor and bachelorette parties. ﻿