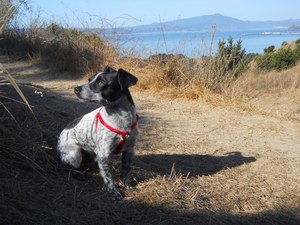 ​Dually has quite an adventurous life. He first  joined the Americana Mayhem team in 2013. He is a rescue dog with an exciting story. As a small puppy he lived in a shelter that burned down! How scary and traumatizing that must been for such a small guy. Then he was transferred to another shelter where he was cared for and taken for walks with other dogs. There he became socialized and learned to get along with other dogs.  After a long search high and low, Matthew and Dixie at Americana Mayhem finally found him. From the first time they saw him they knew that he was the perfect match for a loving member of there team and would become their best friend. After graduating his 6 wk doggy agility course, he was ready to start learning tricks for the show.
Dually is an extremely smart dog. He is a mixture of jack russell, healer, and Chihuahua, which gives him tons of energy and makes him a hard worker who is highly intelligent. He is a super friendly dog who loves people and other canines alike. He especially loves to show off his new ticks and skills. His sweet disposition and handsome physique makes him a great addition to our tam and it's easy to see why he has quickly become "America's Favorite Dog!" 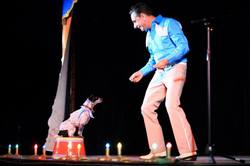